We’ve told you that barley is ancient – possibly the first cultivated crop, in fact. We’ve explained that it is a resilient little chap that can grow in the most marginal conditions this beautiful old planet can throw at it. We’ve banged the supergrain drum loudly and proudly … and now with even more reason, it would appear. 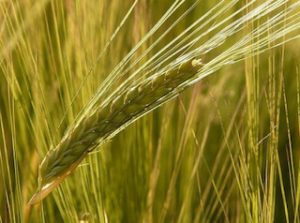 Scientists have long recognised that the breadth of barley’s history and geography means a wide and diverse genetic bank, with particularly hardy heritage varieties that could offer farming solutions in the face of climate change. Rediscovering barley and how to cook and consume it could be a vital part of addressing the future of feeding our planet, then. A part that we at Bright Barley hope we have a small role in: #BringingBarleyBack

More than that, however, researchers at Heriot-Watt University in Edinburgh have recently identified a specific gene in barley (HvMYB1, as you ask) that is responsible for its drought resistance and could be used in plant-breeding to future-proof the wider cereals industry too.

Who knew that barley had 39,000 genes, as well? That’s twice the amount that we have. We may need to start watching our backs!